I’ve recently confirmed my attendance to the OLDE CITY, NEW BLOOD Urban Fantasy and Paranormal Romance Convention in St. Augustine, Florida. The con will be held February 8-10, 2013, and will feature a gaggle of UF/PNR authors, book bloggers, and readers. This is the inaugural year for OCNB so it should be a lot of fun. Click on the picture link below for more information. 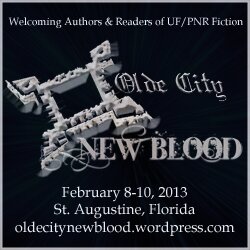 Mammoth Book of Ghost Romance is out in UK and Kindle!

The UK paperback and Kindle versions of THE MAMMOTH BOOK OF GHOST ROMANCE has been released!

Here is a brief excerpt from my steampunk-inspired fantasy, Seventeen Coppers, in which Ro Vargas is hired to steal a soul but runs into a ghost from her own past:

Warm breath tickled her ear as a body pressed close to her back. “I wouldn’t do that if I were you.”

Ro pulled back from the voice, reaching for the pepperbox revolver at her side.

A firm hand wrapped around her wrist as she spun to face her accuser. Light hazel eyes sparkled with deadly amusement. “Is that any way to treat an old friend?”

Ro eased her stance. “Mason Beck,” she said, as the man who held her smiled. “I thought you were in prison.”

His smile widened to a grin and he inched closer. “I decided an early release was in my best interest.”

“Hmm, I suppose self-release is a subject with which you are quite intimate.”

Mason chuckled. His hand slid from her wrist to her shoulder, making her shiver despite the day’s repressive heat. “My sweet Rosalind.” His roughened fingertips stroked the flesh exposed by her shirt’s collar. His distinctive southern Asthegan drawl colored his words with visions of verdant forests and balmy nights. “That wit of yours will be the key to your undoing.”

Ro retreated a few steps, anxious to slow her racing heart. “Perhaps, but you, sir, won’t be the one doing the undoing.”

Mason followed her until she bumped into the rough-hewn edge of a market stall. He placed one palm on the wall beside her head. Sun-lightened brown hair pooled on his shoulders in soft waves as he leaned forward. His breath made her already warmed cheek all the hotter when he whispered in her ear. “Are you certain of that?”

Ro swallowed the lump in her throat to reply a little too breathlessly, “Quite certain.”

He examined her face. A languid smile tugged at his full lips. He swept a lock of her golden curls over her shoulder and a wicked gleam sparked in his eyes. “A pity, love.”

The US paperback edition will be released August 7, 2012.

Supporting a Good Cause: Cure for Diabetes

Posted by admin on May 1, 2012 in Announcements, Events, For Writers | 0 comments

Every year, bestselling author Brenda Novak sponsors an auction to support finding a cure of diabetes. This year, I’m honored to participate in this worthy cause. As someone who is “recently” diagnosed with Type II Diabetes (I was officially diagnosed in March 2011, so I’ve spent the past year adjusting to this new lifestyle.), this cause is especially dear to me.

For that reason, I’m offering some fabulous items for you, my faithful Minions, to fight over–uh, bid on. Here are my offerings:

For Writers — Critique of a partial (up to 200 pages!) unpublished manuscript!
* Any genre
* Critique will focus on plot, pacing, and character development
* Manuscripts are due for review no later than August 31, 2012
* Maximum of a two (2) month turn around
* Follow up emails and/or phone call

I rarely offer critiques so this is huge. If you’re looking for feedback on a project, here’s your chance.

Tons of great items from outstanding authors are available. If you’ve never considered bidding on something, please consider it now. Support a great cause and win some seriously awesome stuff.

This year I’ve decided to remain close to home so my event schedule is minimal and flexible. At the moment, I only have one appearance scheduled — Daddy’s Girls’ Weekend, April 13-15, Mobile, AL — and a few online events in the works.

Am I becoming a hermit? Am I stricken with some unnatural ailment? Am I secretly a spy for the planet Rcaror 9 and have received the long awaited signal that orders me to steal the lint from everyone’s left pocket so that our beloved Queen Musethy may use it to create a comfortable bed upon which she will spawn a horrible demented race of Jethro Tull-worshipping space zombies?

The truth is that I simply want to spend more time at home actually writing and less on the road talking about writing. (Plus that pocket lint isn’t going to collect itself!) Therefore, I’m limiting myself to events/appearances that are within easy driving distance or can be done from the comforts of my writing cocoon.

As always, I’ll update the Events list as they are added to the schedule, and you can always find me Inside the Pod, every Tuesday, with my fellow Ninja Peas, Michelle Ladner and Alexis Lampley.

A new release date for the MAMMOTH BOOK OF GHOST ROMANCE has been announced! 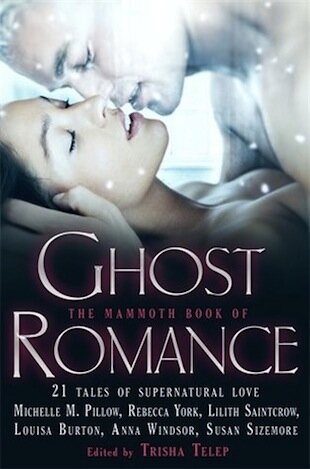 I’m honored to be a part of this incredible anthology and included among such tremendous talent. My short story, Seventeen Coppers, is a steampunk-inspired fantasy romance: Ro Vargas is hired to steal a soul but who will save hers?

Jeannie Holmes is the author of the Alexandra Sabian series. She lives in Mobile, Alabama with her husband and four neurotic cats. 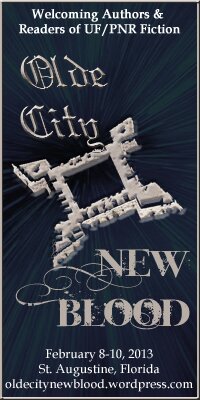